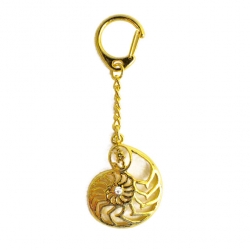 Snail has the ability of alternating its body by stretching. It can reduce injury and prevent from potentially dangerous animals by producing mucus. Spiral snail also can cover its entrance in order to protect itself. Carrying such golden Ammonite snail shell amulet can ward off bad energy and transform negative energy into positive energy.

The Golden Ammonite Snail Shell Amulet is made of brass. The dimension of it is approx. 4".


Currently there are no reviews for this product. Share your opinion with others, be the first to write a review.
Related Products