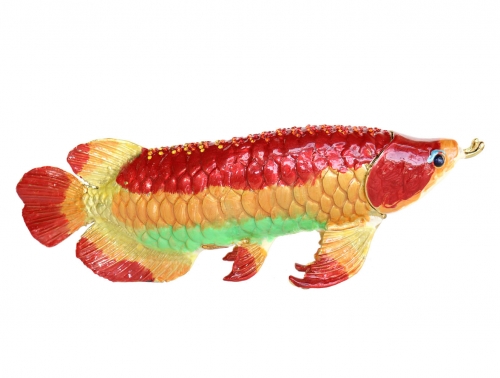 The red golden bejeweled arowana fish is embedded with red yellow crystals, and is the perfect feng shui item for attracting wealth since arowana fish is regarded as the emperor in the fish kingdom for its powerful ability to create authority and wealth. Arowana Fish are beneficial for career advancements, and are known to favor one against all obstacles.

With its abilities to energize wealth and abundance, the gold arowana is said to be the most expensive of all freshwater aquarium fish. Placing an arowana figurine in your home or office will boost your opulence and career luck. The arowana fish is reminiscent to the powerful dragon, thus explaining its name as the “golden dragon fish” by the Chinese.

You will find one small compartment as a cherish box when you open the head of the bejeweled arowana fish. You can put some cherished items, such as jewelry inside this secret compartment.