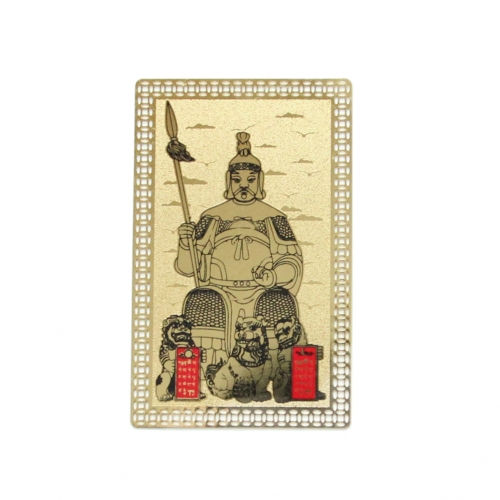 Tai Sui card 2017 features the noble Tai Sui (also known as Grand Duke Jupiter) with golden colored Chinese inscriptions. In Chinese culture, Tai Sui is a position in the celestial heavens responsible for the world’s affairs for a certain year. People’s happiness, luck, fortune, health, and prosperity are all under his control. It is said that one must appease and pay respect to Tai Sui to avoid a year full of obstacles and difficulties.

It is very important to avoid confronting Tai Sui and angering him unknowingly.  The direction of Tai Sui in Feng Shui changes every year, and in 2017 (The Year of the Rooster), Tai Sui relocates to the West sector.

Additionally, those born in the year of the rabbit, rat, horse, and rooster are in conflict with the Tai Sui in 2017. To appease Tai Sui and avoid obstacles, difficulties, and bad luck in 2017, carrying such 2017 Tai Sui plaque is strongly encouraged.

One can carry this Tai Sui Card with him/her throughout the year. The dimension of the 2016 feng shui card is approx. 3 1/8" x 2". It is made of thin metal coated with plastic.