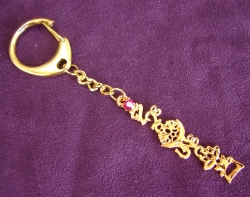 The fire totem talisman is consisting of 3 powerful Sanskrit syllables - BAM syllable on the base, AH syllable in the middle and HRIH syllable on the top. These 3 syllables are joined by one lotus and utpala flower - all the five items in the totem represent Fire Element.

The totem consisting of 3 syllables can protect carriers and keep them safe as well as bring blessings from heaven. The meaning of those 3 syllables are as followings:

BAM syllable, which has the energy of Vajrayogini or commonly known as Red Tara, has power to ward off evil and spirit harm. The emblem of Vajrayogini (Red Tara) is utpala flower.

AH syllable, which is the seed syllable of Amoghasiddhi, can help people overcome fear, tolerance, envy and jealousy.

The syllables are also associated with speech. This fire totem talisman is ideal for who are in politics, salesman, teachers. It can illuminate your career, fame and reputation.

The fire totem talisman is made of brass and the overall dimension is approx. 4 1/4".