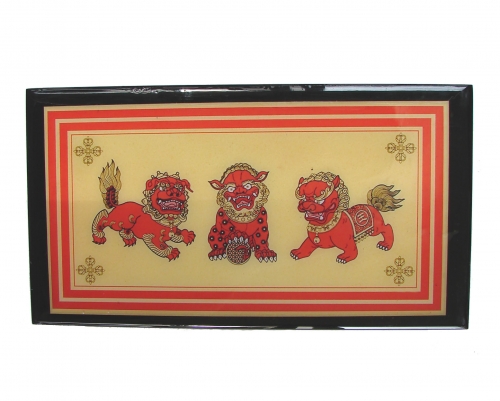 This excellently crafted 3 Celestial Guardian Plaque features the three powerful celestial guardians. These three Guardians (also known as the three Red Lions) are a powerful remedy against the malevolent Three Killings. These celestial animals are said to have been sent down from the God of Heaven to protect the trinity of Heaven, Earth, and Humans.

Place this three Lions (also known as three chi lin) plaque in the North sector of your room as a cure against the malevolent aura of the Three Killings. In 2018, the Three Killings also specially creates conflicts for those born in years of the Rat and Horse.  All are recommended to use this Three Killings cure in 2018 for whose main door located in the north location.

About the 3 Celestial Guardians

Feng Shui Fu dogs are also called foo dogs. “Foh” in Chinese means Buddha, and these legendary animals are widely seen in front of Buddhist temples, palaces, homes, and homes of the royal. Because of their strength and legendary power, Foo dogs are also commonly embroidered on robes of ancient Chinese royalty and officials.  These beautiful creatures are considered sacred in Buddhism and Chinese culture, and are a symbol of wisdom, protection, power and positive chi. Foo dogs are believed to guard against evil spirits and harmful chi from entering the house.

The pi yao is often displayed near cash registers and business centers because these magnificent creatures are said to appease the Grand Duke Jupiter, increase business luck, and increase profits abundantly. Pi Yao’s are very unique because they do not have an anus and are said to have an infinite appetite. This enables the creature to only swallow in large sums, and not have anything to pay in return. This is why the pi yao is so popular among businessmen and centers; the pi yao will enable its owner to earn lots of money, and not lose any profit. The pi yao is also famous for its obedient, powerful, and protective character. Pi Yaos – like Foo Dogs – will protect its owner from negative chi and illnesses. The pi yao is often featured on small charms and amulets to enable its owner to carry them around in a versatile manner: securing the owner’s protection against ill chi, abilities to achieve goals, and business luck.

The Chi Lin, Qi Ling or Kei Loon is a heavenly animal from ancient Chinese legends. With the head of a dragon and the body of a horse, it is a unique combination of the best qualities of both these auspicious animals - some of the noble symbols it holds in Feng Shui are power, bravery, high aspirations, a sense of competitiveness, wellbeing and determination.The Chi Lin, due to the Dragon head, releases cosmic chi (which is believed to summon success, long life and intelligence), and it is very loyal to its owner, due to its horse traits. The carp scales on its back is said to serve to bring a load of wealth into your home or business, as carp is a feng shui symbol for abundance.