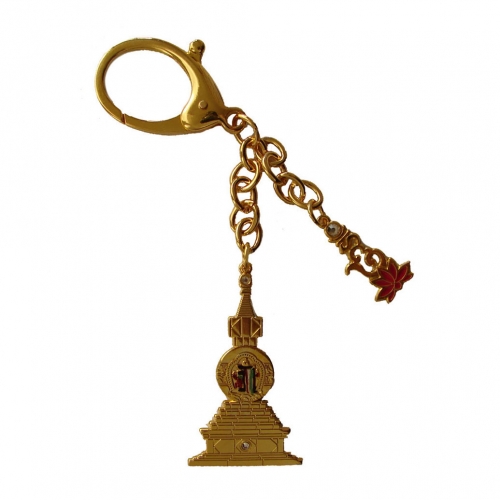 With elegantly designed image of the Kalachakra Stupa and the HUM syllable sitting on a Pink Lotus, this amulet is a rather potent tool to help one overcome the Five Yellow as well as enhance career luck.

Kalachakra Stupa is also called SheliTa which look like the pagoda in which to hole Sheli. Sheli is the relic of the Buddhist patriarch Sakyamuni Buddha bone, bead-like or gem-like resultant. Buddhism revere the relic to worship the Sakyamuni Buddha. Buddha relic is handed down as the sacred Buddhist.

Kalachakra, which is Time Wheel literally in Chinese,  is the tenfold symbols which are very important powerful protection symbol in Tibet. Tenfold symbols are consisting of 3 pictures and 7 Devanagari.

If, unfortunately, one falls into any of these scenarios, he should carry the Kalachakra Key Chain with Lotus HUM throughout the year to deflect the threatening energy.