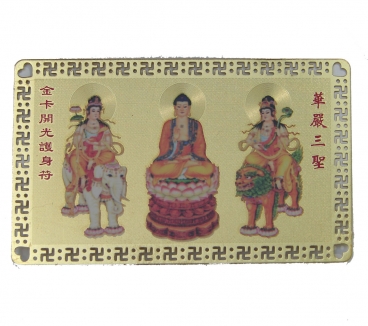 This beautiful 3-Bodhisattva talisman card framed with motifs of the Buddhist swastika has the image of 3-Bodhisattva on one side and powerful Buddha script on the reverse side.

Manjushri Bodhisattva, standing on the left side of Sakyamuni Buddha, is one of the four Buddhist Buddha. Because of the moral superior, Manjushri is ranking the first of the Buddha and he is called the Dharma Prince. Manjushri stands for wisdom and knowledge. He is widely worshiped by people in the world.

Manjushri Bodhisattva is one of riding on sacred lion symbolizes wisdom whilst lion symbolizes authority and power. On the back, it is Buddha light to stand for illustrulating and protection.

Samantabhadra Bodhisattva, standing on the right side of Sakyamuni Buddha, is one of the four Buddhist Buddha. Samantabhadra Bodhisattva riding on sacred elephant symbolizes joy, kindness, knowledge, illumination and wealth whilst elephant symbolizes strength, power and endurance. On the back,  it is Buddha light to stand for illustrulating and protection.

You can put 3-Bodhisattva Talisman Card into your wallet or purse to acquire benefit result from 3-Bodhisattva. The dimension of the talisman card is approx. 3 1/8" x 2". It is made of brass.

X
Currently there are no reviews for this product. Share your opinion with others, be the first to write a review.
Related Products