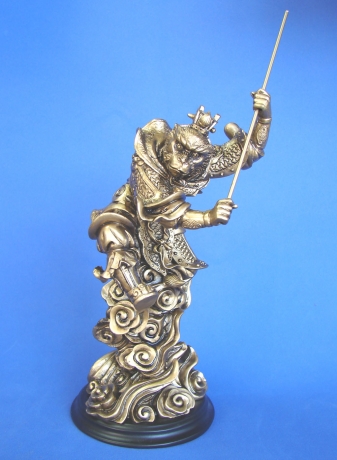 Monkey King is also known as Sun WuKong in China. He is the main character in the novel Jouney to the West which is one of the four famous classic novels in China. In the novel, he is a monkey born from a stone and gains super powers through Taoist pratices. After rebelling against heaven and being imprisoned under the Five-finger Mountain by Sakyamuni Buddha, he later accompanies the Monk TangZeng on a jouney to retrieve the Buddist sutras from India.

Monkey King is the skilled fighter who has powers to transform herself to any other objects, such as tree, house, animals.  He also knows spells that can command wind, part water, conjure protective circles against demons, and freeze humans, demons, and gods alike.  He has specia eyes (huoyan jingjing) that can recognize ghost or evils whatever how those ghost or evils change themselves to others (from wikipedia.org).

Monkey King represents strength and loyal.  He is the worrier who can expel ghost or evil and safeguard people. Displaying him at home/office can dismiss evil thing.

X
Currently there are no reviews for this product. Share your opinion with others, be the first to write a review.
Related Products