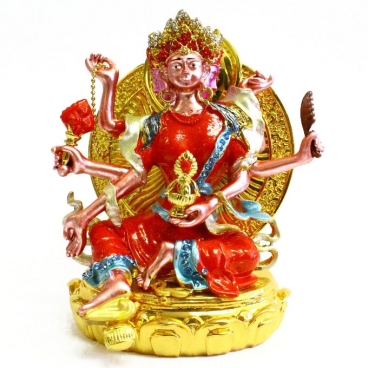 Write a Review
OverviewReviewsTell a Friend

Vasudhara, depicted with three faces, six arms and a beautiful golden orange body, stands for STREAM OF GEMS in Sanskrit. Vasudhara is the Buddhist Bodhisattva of wealth, prosperity, and abundance.

"According to a legend in the text known as "The Inquiry of the Layman Sucandra", an impoverished layman named Sucandra approaches the Buddha Shakyamuni requesting a way to obtain large amounts gold, grain, silver, and gems in order to feed his large family and engage in acts of charity with the surplus fortune. Shakyamuni, aware of a mantra about the bodhisattva Vasudhara that would suit his purposes, bestows Sucandra with an incantation and religious ritual that when followed would result in good fortune and prosperity brought on by Vasudhara herself. Upon commencing the rituals and teaching them to others, Sucandra begins to prosper. Noticing his success, the monk Ananda asked Shakyamuni how he had obtained this fortune so quickly" (by wiki).

Displaying Bejeweled Vasudhara at home can invite wealth and abundant in. If you can, offer her flowers, water and recite her mantra daily. Her mantra is: OM SHRI VASUDHARA RATNA NIDHANA KASHETRI SOHA.

The Bejeweled Vasudhara is made of brass and embedded with crystals. The dimension of it is approx. 4" x 2 1/4" x 4".